Review: After a slow simmer, Avo ascends as a top Italian restaurant in New Orleans 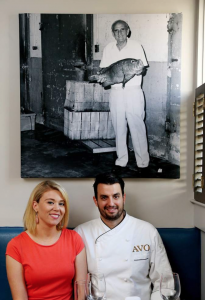 What’s more gratifying, however, is watching a restaurant reach its potential, and that’s the story lately at Avo.
It’s a tale told through bucatini carbonara, the long, hollow noodles giving a pliant tug under a creamy, smoky sauce or through an octopus preparation that dazzles visually on the plate before doing the same on the palate.

But Avo’s ascent is about more than any particular dish.

It starts with a young family, chef Nick Lama and Melissa Lama, who got hold of a unique address, the former Martinique Bistro with its indoor/outdoor courtyard dining room under a retractable roof.

It draws on contemporary ideas for high-end Italian cuisine, with precision and artfulness but also the softer edges of familiar flavors.

And, since the Lamas opened Avo one year ago, it has relied on resolve to get past the pitfalls of starting an independent, family-owned restaurant and reaching the promise that makes the best restaurants of this type so compelling.

It took some time to simmer all together. But now Avo is an ambitious, modern Italian restaurant that feels authentic and personal and at the top of its game.

Lama is a New Orleans native from a Sicilian family with deep roots in the city. That family has been helping run Avo, and the more they’ve gotten involved over the last year the better the dining experience has become. It’s one thing to read in a chef’s bio that his mother inspired him in the kitchen. It’s another to have the chef’s mother visit tableside. And when your waitress is also the chef’s cousin, somehow her menu recommendations carry more weight.

These are among the intangibles that help explain why Avo feels like a New Orleans restaurant even though it doesn’t serve overtly New Orleans food.

Avo’s menu framework is similiar to other modern Italian restaurants — carpaccio and burrata, squash blossoms and hand-made pastas and some rustic-turned-refined entrees.

This was a solid basis, but in the beginning dinners here often felt incomplete. One course might be off, or some dish was just underwhelming compared with renditions at so many other restaurants around town.

But that was then. Now, dishes under the same name taste like full and original expressions of the chef’s ideas.

The tuna crudo is an elegant, abundant reef of small, gleaming chunks, interspersed with black rice chips and fried nuggets of avocado, pressed gently into a wave of thick aioli with the smoky, peppery flavor of Calabrian chiles.

The octopus is a now a plump curl with charred ridges to contrast pleasingly with an overlay of fruit (sometimes kiwifruit, sometimes mango) and with dollops of lardo — whipped, cured pork fat that does to octopus what butter does to hot bread.

Between such elaborate appetizers, Avo can still send out spaghetti in spicy red sauce that’s the picture of simplicity, or meatballs or linguine with clams. Working a dish like this into a meal (especially a shared meal) brings the menu back home.

From here, Lama’s best entrees sound familiar but up the ante again. Risotto is heaped with sweet lobster, though it’s the humble English peas dappling the top and worked into the creamy textured rice that give the dish its soul and add a bright, delicate taste of spring. Scallops bring several vivid flavors into harmony: avocado cream piped over the scallops’ buttery-golden tops, earthy, herbal grains of faro as a base, a spicy, smooth red sauce running underneath.

You might call the trio of rabbit a study of rabbit, but that sounds too academic for something this lusty. There are ribs, their highly-seasoned meat worth the hands-on effort to extract between tiny bones. There’s a confit leg, crisp and amber-hued, and there’s a roulade bound tight around herbs. Whole carrots and carrot purée are the earthy/sweet counterpoint and cool wisps of watercress cut across it all.

A courtyard, a square

There are still hiccups, and occasionally a concept won’t add up. The fregula Sarda, for instance, feels like a seafood stew that is missing the stew. It starts with plus-sized couscous with a good clutch of shellfish. But it’s rendered more as a salad under arugula and a bit of sauce, forgoing the deep broth in which it could’ve commingled. You end up chasing little pearls of fregula around the plate.

The dessert list is short and straightforward. Get the zeppole for sugared fried donuts to dunk in chocolate sauce; get the panna cotta to plunge your spoon through layers of scalded milk sweetness.

The wine list is entirely Italian, and while it isn’t long it draws plenty of variety from the country’s myriad wine styles, and it brings some good values, too.

You can dine inside and at the bar. But most of the time, you want to be in that walled courtyard. Its retractable roof, installed during the Martinique era, is a remarkable accommodation for our weather. It even releases the din, keeping noise levels conversational.

But significantly, it also brings the outdoors in. When the sun goes down and the courtyard cools, rows of candles flicker beneath the lit windows of the neighboring house. Look up and a towering live oak seems like a dark extension of the ivy-covered wall, screening the moon as it rises through the course of a meal. It’s easy to feel like you’re dining in a town square.

After a year at the pace of the current New Orleans dining scene, Avo is not exactly new. But in the last few months, it feels like it has arrived. And right now, with the roof open and one impressive dish following the next, Avo has all the excitement of the hot new thing.